Reference-Based Pricing: Is It Right for Your Organization?

To combat rising healthcare costs, employers are considering migrating from traditional preferred provider organization (PPO) health plans to cost-saving strategies. Reference-based pricing (RBP) is one option that continues to gain traction with employers due to its ability to dramatically reduce healthcare spending by as much as 30%.

To understand how RBP can reduce healthcare spend, it is important to first understand how healthcare providers are paid under traditional health plans like PPO plans. PPO plans are very convenient as they allow members to see providers in-network, as the insurance carrier has contracted with the provider to reimburse a percentage of the billed charges. These negotiated discounted rates are confidential, but are estimated to be between 45% and 60% of the billed charges. While these discounts sound great, they do not prevent providers from arbitrarily setting their billed charges, which is why the costs for simple procedures can vary so significantly within a geographic location.

The RAND Corporation, in conjunction with Employers’ Forum of Indiana, studied data from self-insured employers, state-based all-payer claims databases, and health plans across 25 states to assess the large variance among commercial insurance reimbursements. The study found that in 2017, the reimbursements issued to hospitals for commercially insured patients was on average 241% of what Medicare would have reimbursed.

In contrast, RBP vendors use “bottom up” pricing to determine reimbursements. Vendors typically use the Medicare reimbursement rate as their benchmark and then offer the provider reimbursement anywhere from 120% to 170% of Medicare.

The chart below demonstrates the impact bottom-up pricing for a knee replacement can have as compared to top-down. In this example, the hospital billed $75,000 to Patient A’s PPO health plan, which then applied its contractual discount of 50% for a reimbursement of $37,500. The same hospital performed a knee replacement for Patient B, who has an RBP plan. The hospital submitted the claim with a $75,000 billed charge, but instead of applying a discount like the PPO plan, the RBP vendor used the Medicare reimbursement rate of $15,893 as a benchmark, and offered to pay the hospital $22,250, which is 140% of Medicare. In this case, the hospital accepted the reimbursement of $22,250 offered by Patient B’s health plan, which is 40% less than what Patient A’s health plan reimbursed the hospital. 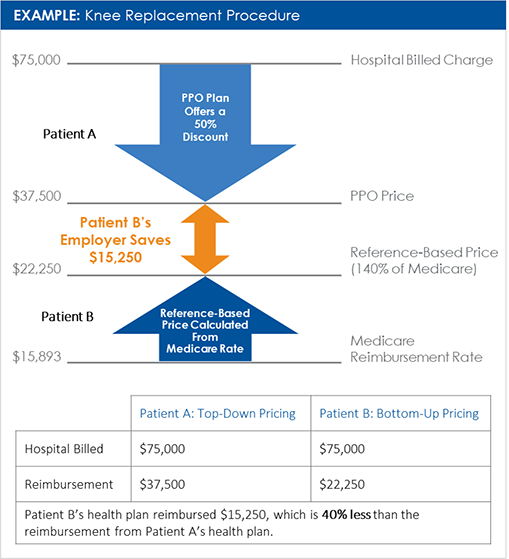 Unfortunately, the savings generated from RBP may also bring issues with accessing care and balance billing. Some providers may refuse to provide services for RBP members, which can be problematic in geographies with limited access to care. Other providers may accept the payment from the RBP vendor but generate a balance bill to the member for the difference between the payment and the typical PPO reimbursement.

Fortunately, RBP vendors have developed strategies to overcome these challenges. Refusing to provide services to members is a common negotiating tactic of providers to compel commercial carriers to maintain or increase reimbursement rates. Generally, these quarrels are resolved behind closed doors and the same can be done for RBP. RBP vendors instruct members to contact them immediately if they receive a balance bill, so that the RBP vendor may engage with the provider on the member’s behalf to resolve the issue.

No Link Between Cost and Quality in Healthcare

Higher cost can sometimes be an indicator that something is of better quality or more valuable, but that is not true for health services. The Health Care Cost Institute has studied de-identified data of more than 50 million lives covered by multiple national health insurance carriers and found no correlation between cost and quality.

Communication Is Key to RBP Success

Member communication, education and support are critical for a successful RBP plan implementation. The timeline for transitioning to an RBP plan should be much longer than any other type of plan change, and it should start with communicating to all members about RBP well in advance of open enrollment.

Benefits consultants should work closely with human resources to determine the communication mediums (print, digital, video, face-to-face, etc.) that members will respond to and the cadence of the communication. These communications should continue throughout the plan year so that members are continually reminded of the support available to assist with any issues. Employers that are introducing an RBP option beside an existing plan design should clearly communicate the differences between the plans regarding both cost and logistics.

How USI Can Help

RBP is not for all employers, but it may be a solution for those whose health plan costs are rising rapidly and not responding to other cost containment strategies. As the largest benefits broker for the middle market, USI Insurance Services recognized the savings opportunities that RBP could offer employers and has successfully implemented RBP with clients of various sizes across the U.S.

These implementations provided USI with unique insights as to how best to implement and manage RBP plan with employers. From this, USI developed a proprietary tool to help employers determine their readiness for RBP. In addition, USI has also evaluated leading RBP vendors to understand their RBP models and assess how they may fit with different types of employers.

To learn more about RBP and to determine if it is a viable solution to manage your health plan costs, contact your local USI benefits consultant or email ebsolutions@usi.com.

Get USI insights delivered to your inbox monthly.